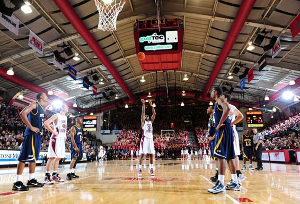 Here we are again at one of America’s favorite sports times- the NCAA Men’s Basketball Tournament, otherwise known as March Madness.  From now until April 4, everyone will be talking about their brackets, upsets, and teams left.  That same guy who is annoying during football season because of fantasy becomes a dream compared to the bracketologists.

Somewhere along the line, it became ok to obsess over your brackets and stop working- to the tune of $1.9B per hour in lost employee time due to the tournament.  $1.9B per hour!  That is a lot of lost productivity.  Another staggering estimate is that $2.5B is wagered in illegal office pools.

Now before the pot calls the kettle black as I always take the first two days of the tournament off, I think that there are some ways you can turn this lack of productivity into a positive.

1.       Have a team meeting during the first two days of the tournament.  Pick a spot and watch the games as a group.  It is amazing the camaraderie that will be built through this event.  You will also be amazed how your team will be able to relate to each other better and come out of it more cohesive.  Make sure you are smart and either not serve alcohol or provide rides home.

2.       Run a promotion during the tournament.  If you are in sales, this is really easy.  But if you are in AR or another department, you can have the same type of contest- whoever clears the most outstanding receipts gets a day off or something of the sort to keep people motivated to work.

3.       Have flex time during the first week of the tournament.  Work your forty hours over three or four days.  This works well for the non-basketball fans too.  Any extra time off is a bonus and well appreciated.

4.       Be a killjoy and block sites, ban cellphone or tablet use, and force compliance.  Probably not the best tactic, but it would achieve the goal of reducing wasted time.

I would avoid any type of activity that promotes gambling like bracket challenges as that type of sponsored program is decidedly illegal.  You need to be creative to get the most of out your team during this distracting time of the year.  But with a little planning, you can make the time fun and productive.  And- Let’s Go St. Joe’s!